Last week I was harvesting some lichen and then I had a brilliant idea: a wine + Coca-Cola tasting.

It was years ago when the whole Bordeaux - China explosion began, er, exploding when I first heard about the Chinese predilection for adding Coca-Cola to their wine with rumors, anyway, that this included some of that very expensive Bordeaux.  Once in a while this bit of curiosity wanders through my otherwise unoccupied mind, but never did the obvious occur to me: try it!  Last week when it again wandered through the ol' dust bowl the obvious wandered with it.

I started doing a bit of research, i.e., Googling, because I wanted it to be authentic and so needed ratios. There would be few specifics on the Chinese but I did discover something I'd not previously heard of, Kalimotxo.  Of Basque origin, it is equal parts coke and wine with a spritz of lemon.

Then, BUMMER: the very next day I saw this article from the NYTimes, once again my genius trumped by that little dog and pony show.  The Times refers to it as "a poor mans sangria." 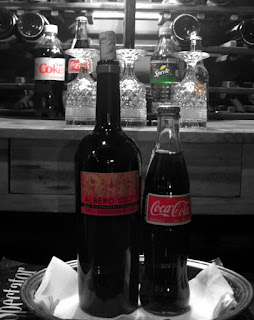 Rather than a 1982 Margeaux I opted for this stuff from Trader Joe's.  Also, I actually found real Coke.  Sprite can also be used, and I got a 7-UP as a secondary tasting.  Lemon wedges were provided. 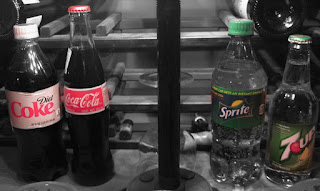 This weekend was the tasting.  Six brave souls took the challenge.  Here are a few comments.
"That's pretty bizarre."
"It's a little bit like a Cherry-Coke Slurpee from 7-11."
"Surprisingly not awful and a little weird."
...and, my favorite, "Both innovative and sacrilege."

Everyone agreed the lemon helped and also made it more sangria-y, as did Sprite instead of Coke. Nobody seemed horribly offended by it but for the people who declined to try it.

The secondary tasting was between Sprite and 7-Up.  Sprite is sweeter, more floral, and more effervescent.  7-Up's neutrality makes it a better mixer.

(I've not had a soda in maybe 15 years?  I tried it with the diet Coke.  Without the lemon I wanted to shave my tongue.  The lemon definitely helps.)

Also, Nick (as usual) offers a bit of interest on this otherwise sigh-invoking trend-in-waiting.  Click over to read it in full, it has a great ending, but here's a teaser. "Oddly enough there is another link from the distant past that associates Bordeaux with Coca Cola. The original Coca Cola was once made with Bordeaux wine. The recipe for Coca Cola was invented by John Pemberton in Georgia in 1885 and he named it Pemberton’s French Wine Cola." 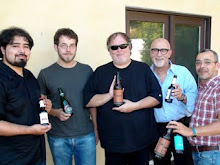 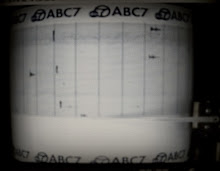